My Experience At AEW Dynamite

My Experience At AEW Dynamite

So, I went to Dynamite in Pittsburgh on Wednesday! I've never been to a live TV Taping or anything like that before, so I wasn't sure what to expect. Here are my takeaways from the stands...

-I was surprised they went with the Peterson Events Center and not the PPG Paints Arena (where WWE books), I'm sure there were reasons. "The Pete" holds around 12.5k people according to WikiPedia, they had an entire section blocked where the hard cams were and behind the ramp (the usual I think), but it looked to me like they sold all the good seats and the nosebleeds were probably 2/3rds... I'd estimate the crowd was between 6k and 8k... it felt full.

-The night flowed INSANELY well. I'm not sure what I expected, but this moved along better than any house show I've ever been to. Excalibur, JR, and Shiavone got introductions at 7:30 which moved into the first AEW Dark Match, Justin Roberts explained that we were set to go live and would be starting in the ring, Private Party and Lucha Bros got their full entrances, and things never stopped from there. The second two AEW Dark matches went after the main event fall out and we were out the door by 10:30.

-I can't really speak for pops and who was over, because everybody was. What I will say is that I couldn't believe how loud it got when Janella came out, and his presence - his 'it factor' if you will - blew my mind. Of all the guys they signed up getting going he was one I hadn't really heard of, I actually thought he was just a promoter because of the Spring Break stuff. Tonight I realized the dude has a ton of runway.

-On that note, Kenny fucking Omega... hands down the best live performer I've ever seen. I mean, I haven't seen a lot lately, but goddamn. I'm reading this morning that the Omega/Janella match was a late addition to the card by Tony Kahn, which floors me even further at just how smooth it was without looking rehearsed.

-Had people not been waiting to see Darby in the second Dark match after the main event, I'm pretty sure the arena would have cleared out for Emi Sakura vs Allie vs Penelope Ford vs Sadie Gibbs. To quote the guy in front of me to his buddy, "Jesus Christ, we're getting fifteen minutes of this shit, aren't we...?" "Oh for god's sake, what time did it start?" I mean, everybody was pretty drunk by then, but the sentiment echoed many I overheard. Granted, that main event and especially the fallout afterwards were a pretty tough act for these ladies to follow, but even my open mind will admit this one was pretty bad. They should have put it on first instead of Sony/Dustin vs Avalon/QT.

-Maybe not on the other side of the arena, but Jericho's "luxery box" (really just a section of bleachers they blocked off) was about 30 feet to my left and was very distracting. It was a good bit, but he was up there too long before doing anything. Sammy Guevara was the only one that was actively engaging fans, Jericho and LAX had blinders on. The brawl was a lot of fun though, and I could be speaking from being in the moment, but didn't come off as cheesy at all.

-If/when I go again, and maybe this was a rookie mistake, but I'll be getting seats where I can see the ramp side of the ring. That's where all the dives went, and there were a lot. I mean, it makes sense, I just didn't think about it.

-They announced commercial breaks twice, the first Cody got his full entrance complete with pyro, he came out and screwed around with the crowd until they were back on the air. He went around ringside trying to get people to tell jokes, it was entertaining. The second commercial break had Justin Roberts reading people's signs out loud while the camera put them on the big screen, somebody's sign said something about traveling three hours on their birthday for this which prompted Justin to get the crowd to chant 'Happy Birthday'... again the whole thing seemed really laid back and fun. I expected "pep talks" and shameless tactics to get people riled up for TV, but there was none of that, it didn't feel like a televised event what so ever. There were no breaks, no time for the crowd to cool down, the next matches started as soon as the previous ones finished... it all seemed so laid back and organized.

After their original announcements to start the show Shiavone, JR, and Excalibur weren't shown at all. They sat in the dark up by the ramp, and I honestly forgot they were even there. There were no "rules" to being in the crowd, and at no point did it feel like the talent were performing for the cameras, everything felt like it was for the fans in house. It didn't feel like I was at a broadcast show whatsoever. Maybe that's normal, but I was super impressed by that.

-Overall an awesome experience. $45 got me some GREAT seats, despite being in a bad spot for all the crazy dives. Good crowd of people, I had a lot of fun conversations with strangers. I can't recommend enough, especially for the price.


I hardly ever get out these days, so please humor my fanboy pics lol... 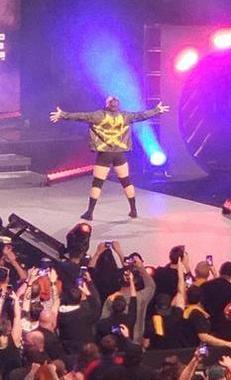 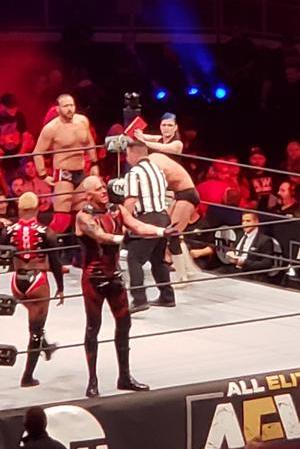 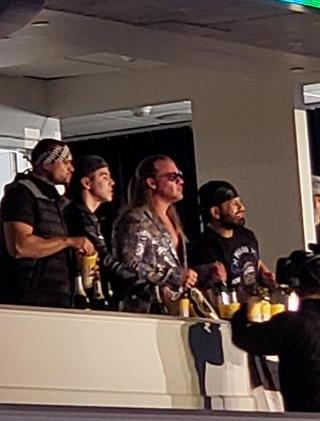 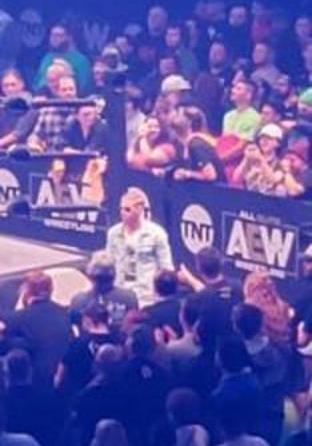 Re: My Experience At AEW Dynamite

Don't let the price fool you either, in hindsight, $50 will get you into about anything I guess. There were three of us, and I was thinking prices would drop the closer we got to Wednesday, so I didn't buy until Sunday. That third seat really narrowed things down, and I kind of lost my gamble. Had I jumped when I first checked it out two weeks ago we could have easily been 10 or 15 rows closer for $30. When I first looked, at single tickets, you could get floor seating for around $50.

Rookie mistakes I guess, my wife and I have just recently (within the last year or so) have started going to concerts, and for pairs of tickets it's usually a pretty safe gamble to buy late.

Regardless, I downloaded the show last night and fell asleep. But from what I've seen so far, I'm pretty sure there's a camera angle they switch to quite often where you can see us. Like the kind I'll have to pause it and zoom in, but I'm excited!

Re: My Experience At AEW Dynamite

Glad you had fun, I'm hoping to make an AEW show next year
Top
Post Reply
3 posts • Page 1 of 1

Return to “AEW - All Elite Wrestling”

Users browsing this forum: No registered users and 0 guests